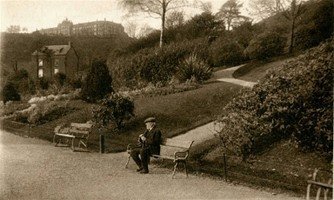 Swansea Council has now handed over the keys of the kiosk café in the park’s refurbished bowls pavilion to a new tenant who will open the attraction this weekend.

The café, to be run by local businesswoman Jax Robinson, will generate an atmosphere reminiscent of Dylan Thomasand the Kardomah Boys’ heyday.

The kiosk café is one feature of a major ongoing refurbishment project at the park being funded by the Heritage Lottery Fund and the Welsh Government’s Sustainable Tourism Project, backed by the European Regional Development Fund through the Welsh Government, Visit Wales, Swansea Council and the Friends of Cwmdonkin Park.

Cwmdonkin Park is located within a stone’s throw of Dylan’s childhood home on Cwmdonkin Drive. The park is being refurbished in readiness for the 100th anniversary of Dylan’s birth in 2014.

Cllr Nick Bradley, Swansea Council’s Cabinet Member for Regeneration, said: “It’s important we celebrate Swansea’s close links with Dylan Thomas because his enduring legacy continues to put our city on the international map many years after his death.

“This new tearoom will help recreate the atmosphere of what was a golden age for literature in Swansea when local wordsmiths laid strong foundations for our status as a leading city of culture.

“It’s one aspect of an ongoing refurbishment programme at the park that will be largely complete by the early summer.”

DT100 is a high-profile festival to mark the centenary of Dylan Thomas’ birth in 2014. The Welsh Government is leading the co-ordination of activity in Wales along with its partners – the Arts Council of Wales; the British Council; Carmarthenshire Council; Ceredigionshire Council, Swansea Council and Cadw. The aim of all partners is to ensure the festival delivers educational, cultural and tourism benefits before, during and after 2014.

Other aspects of the refurbishment scheme at Cwmdonkin Park include an upgrade of the Dylan Thomas Shelter and a new central seating area complete with stone carvings of quotes from some of Dylan’s most famous works.

The park’s drainage system and toilets have also been revamped. Entrances are being improved and tidying-up and planting works could last until the autumn.