Good to Go Wales - Giving our visitors the confidence to book their holiday.
Find out more

Which beach is in the new M&S advert?

If you’re wondering which beach is in the new M&S advert ‘Make Today Delicious’, we have the answer (and it is fantastic for a picnic) 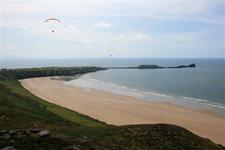 The answer is Rhossili Bay. This world-famous Gower beauty spot shown off as a great location for a picnic by the latest Marks and Spencer’s latest food advert.

The advert, called ‘Make Today Delicious’, is being shown on a range of channels, helping reach a huge audience across the UK. The well-known landmark of Worm’s Head is clearly visible in the 40-second advert, especially when it fades away towards the end.

Cllr Nick Bradley, Cabinet Member for Regeneration, said: “The M & S food adverts are known for their quality and it’s testament to Rhossili Bay‘s appeal that such a major retailer would choose to film there.

“These adverts are watched by millions of people throughout the UK, but their availability online means many more people from across the world will be watching them too. This helps give Swansea Bay and beauty spots like Rhossili and Llangennith a tremendous amount of positive exposure that will attract even more visitors here in future, helping boost the local economy.

“With scenery like Rhossili Bay on our doorstep, it’s hardly surprising that Swansea Bay gets accolade after accolade for our world-class scenery. This is why we use stunning Swansea Baybeauty spots in our outdoor marketing campaigns.”

Rhossili Bay was also named Britain’s best beach, the third best in Europe and the tenth best in the world at the TripAdvisor Travellers Choice Awards earlier this year.

Hailed by The Independent newspaper as the “British supermodel of beaches”, the beauty spot also won the Great British Beach Awards in 2010. And in 2009 and 2010, Rhossili Bay won awards for being the best picnic spot in Wales and the UK.

Have a look at our dedicated pages for more information on Gower’s beautiful beaches.