The Dylan Thomas Festival 2013 has been attracting a global audience, Brazilians and Americans were among visitors who flocked to the opening weekend. 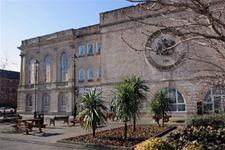 Poet, BBC Radio 4 broadcaster and children’s author Roger McGough launched the festival with readings from his new collection of poetry. Award-winning local novelist Stevie Davies was also on hand with a writing workshop.

The Dylan Thomas Festival, organised by Swansea Council, runs until Saturday November 9. Among the forthcoming events is an appearance by Indian writer Tishani Doshi, who’ll be discussing her new novel, ‘Fountainville’, at the Dylan Thomas Centre on Tuesday October 29 from 7.30pm. She’ll be joined by author Cynan Jones, who was shortlisted for the 2013 Sunday Times Short Story Award earlier this year.

Writer Rob Gittins will then be appearing at the centre from 7.30pm on Wednesday evening (October 30). The author of ‘The Last Days of Dylan Thomas‘ and the radio play ‘Investigating Mr Thomas’, Rob has also written for many TV programmes, including Eastenders, Stella and Casualty. He’ll be discussing Dylan’s time in New York.

Cllr Nick Bradley, Swansea Council’s Cabinet Member for Regeneration, said: “The Dylan Thomas Festival is an important feature of Swansea’s annual cultural calendar. It helps celebrate our most famous son, puts Swansea on the world map and strengthens our reputation as a city where cultural excellence is embraced and encouraged.

“The quality of the programme this year is especially impressive – it combines world class writers with a variety of other events and entertainment that will appeal to all audiences. This is particularly important as we head towards the 100th anniversary of Dylan’s birth next year.”

Other events making up this year’s Dylan Thomas Festival include a Doctor Who Day on Saturday (November 2) to help celebrate the programme’s 50th birthday.