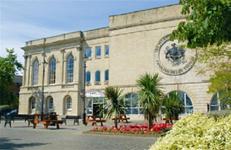 Despite losing out to Hull in the race to become UK City of Culture 2017, Council leaders say the year-long DT100 Festival will benefit many thousands of local people by attracting top quality exhibitions, performances and other cultural activities. It will also help attract new visitors to Swansea as part of the city’s cultural tourism offering.

The Dylan Thomas 100 Festival programme includes events in Swansea, Wales and the rest of the world. Some of the Swansea-based events include a performance of Under Milk Wood at the Grand Theatre, a Dylan Thomas 100 mega poem and the 17th annual Dylan Thomas Festival. An exhibition featuring four poetry notebooks written by Dylan between 1930 and 1934 will also feature at Swansea’sDylan Thomas Centre. Along with extracts from letters and a self-portrait, the items will be on loan from the University of Buffalo.

DT100 is a festival to mark the centenary of Dylan Thomas’ birth in 2014. The Welsh Government is leading the co-ordination of activity in Wales along with its partners – Swansea Council, the Arts Council of Wales, the British Council, Carmarthenshire Council, Ceredigionshire Council and Cadw.

Cllr David Phillips, Swansea Council Leader, said: “We may have been pipped to the post in the race to become UK City of Culture 2017, but festivals of this kind show we’re Wales’ capital of culture and that people across Swansea and visitors here in future have a huge amount of cultural highlights to look forward to.

“A lot of great ideas came from our bid, and we’re determined not to let them slip between our fingers. As part of Dylan Thomas 100, details will also soon be announced about Swansea’s own year-long festival. This will further put Dylan Thomas and Swansea on the cultural map at a time when the UK has never been so aware of what we have to offer. We remain committed to regeneration and culture as key priorities in our war on poverty.”

Swansea Council is also in the middle of completing a major bid to the Heritage Lottery Fund for a new permanent Dylan Thomas exhibition at the Dylan Thomas Centre as well as an education and outreach programme. Other cultural plans include Swansea’s Albert Hall being transformed into an 800-capacity arts centre and the setting up of an expert cultural partnership that will oversee cultural attractions across the area.