First Showing Of Under Milk Wood Excerpts At The Beginning Festival

A first showing of excerpts from the new eagerly awaited Kevin Allen film of Under Milk Wood are some of the highlights of A Cackle with Cawl at The Beginning festival on Saturday (25th October) as it temporarily moves from the Dylan Thomas Birthplace to a larger venue at Clyne Farm Centre (7.30pm)

Mr Allen, who made the cult Swansea based movie Twin Town, has promised a raunchy interpretation of the Dylan Thomas classic as he again teams up with Hollywood actor Rhys Ifans for the first film version of the play since Richard Burton starred in the 1972 production.

Under Milkwood On Air

Under Milk Wood is due for its first screening on S4C around Christmas and also stars, as would be poisoner Mr Pugh, Welsh icon Boyd Clack who along with his partner Kirsten Jones will head a strong line up for A Cackle with Cawl where homemade cawl, bread and cheese will be served up during the interval of an evening full of Welsh humour and pathos.

Boyd and Kirsten will bring their unique brand of song and stortytelling to life whilst also fielding questions about their lives on screen and off as the creators of the cult 90s sitcoms ‘Satellite City’ and ‘High Hopes’.

Kirsten will also read from ‘Kisses Sweeter Than Wine’ which is Boyd’s funny, honest and moving autobiography about a life on three continents.

Also on the bill is the actor/director Mark Montinaro whose work as a performer has taken him to the West End and National and International touring but is never happier performing some of Dylan Thomas’ funniest short stories.

In a busy schedule Boyd and Kirsten will also be at the Dylan Thomas Birthplace the same afternoon (2.00pm) with gypsy jazz group Afternoon in Paris for Dylan Thomas’ Birthday Tea Party. 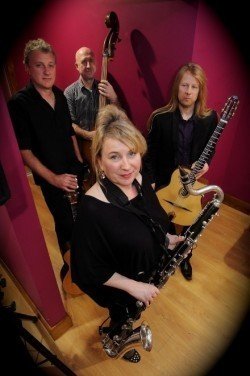 Live Music – An Afternoon in Paris

As Geoff Haden from the Birthplace explained “The 27th was a school day so the party for Dylan would have been on the weekend and as the Thomas family were chapel goers it would not have been on a Sunday so Saturday fits in perfectly.

“This is the third time we’ve celebrated his birthday in this way and there will be real party food as described by Dylan’s daughter Aeronwy of a party she went to in Laugharne with things like Spam sandwiches, Marmite, jelly and blancmange and fizzy orange pop which I think both adults and children will enjoy.”

The Swansea group Afternoon in Paris will reprise their original gypsy jazz style musical interpretation of Dylan’s poem The Clown in the Moon which was written in the Birthplace when Dylan was just fourteen years old.

Said Mr Haden “At some stage the group will perform in the front bedroom where Dylan was born and which has become the unique starting point for anyone wishing to understand the work and life of Dylan Thomas.”

Further information and tickets: 01792 472555 or www.dylanthomasbirthplace.com/eventcalendar