Now home to a local bike shop, Pilot House Wharf is a building that points to Swansea’s rich industrial past, and the days when the area’s seamen were noted for their ability to navigate round the treacherous Cape Horn.

We look at the wharf’s hidden history and rediscover some of the stories of the pilots that made their living racing into the channel to guide incoming vessels, ladened with ore, safely into port.

Early days at ‘The Mount’

Pilots have been working out of Swansea harbour since sea trading routes were established in the early Middle Ages. One of the earliest lookouts used by pilots was the strange earthwork known as ‘the Mount’, which was maintained by the corporation. This lookout was for many centuries located at the south end of Wind Street, where good views of Swansea bay were to be had. Mount Street, as depicted on 19th and early 20th Century town plans, marks the location.

By the early 18th Century, the town was expanding to the south, and it became conditional that any new building in the area would not interfere with the prospect from the Mount. Urban pressures grew, however, and the first pilots’ lookout disappeared in 1804 when an Act of Parliament established the Oystermouth railway.

By 1791, the year when the Harbour Trustees were constituted, pilots were being organised by a committee which ordered, in October of that year, ‘a pilot’s licence be granted to Jeremiah Williams, he having delivered in a certificate of being a fit person to be a pilot and of his having a boat according to the dimensions settled by the Pilot Committee.’ By 1803 the number of pilots was fixed at 24; several individuals whose families (the Aces, the Rossers) were to have long associations with pilotage and the harbour, were then established with certificates. Presumably as a result of a misdemeanour or an accident, it became necessary after 1803 for a Pilot to enter into a £50 bond, with two sureties for his proper conduct, and it was ordered ‘that no person who keeps a Public House be appointed in future’. 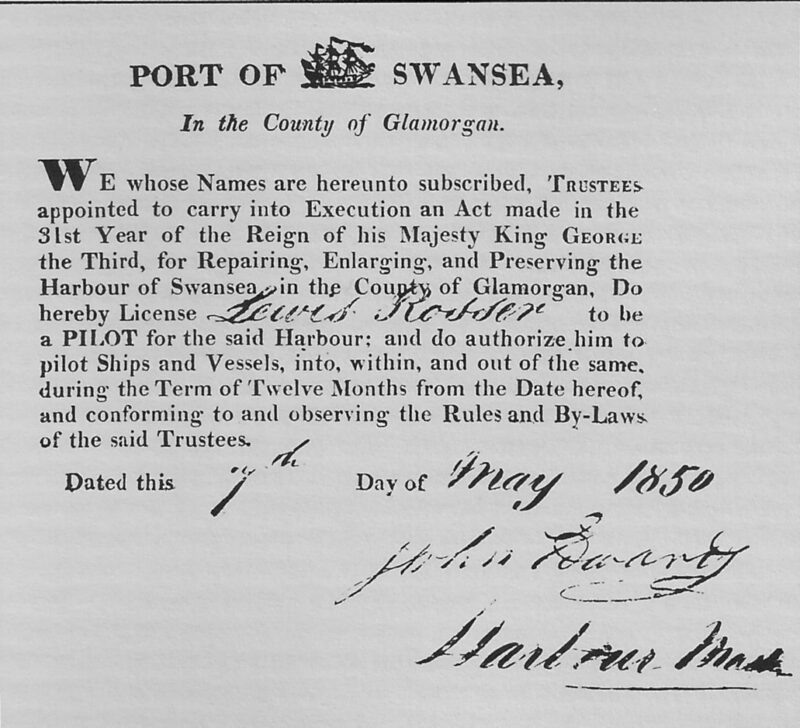 Introduction of regulation and professionalism

Measures were eventually taken to improve the service, and of the behaviour and capability of a maximum of thirty individual pilots, which led to the 1822 Swansea Pilots Regulations, a lengthy rule book which included no than 24 orders. After this date, the rules stated that a new pilot would have to prove service of at least three years’ experience on a Swansea-registered vessel, a recommendation from five other Swansea-based masters, and an approved security of £20. 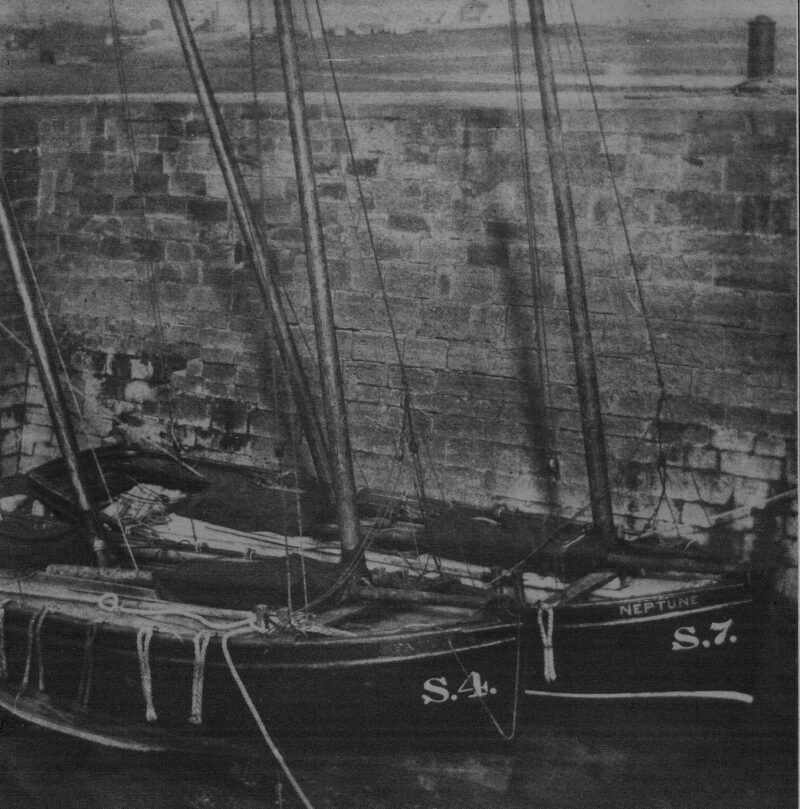 The specified vessel ‘was of 23 feet stowage, seven feet and a half wide, and not less than three feet deep to the gunwhale, fitted complete with six oars for towing of ships or vessels, with the pilot’s name painted thereon according to law…’ The boats were to be clearly identifiable, with white sides and the gunwhale and upper streak black, and each boat shall be marked with the number appointed for her, in black paint on the bow, and on the sails above the reefs the figures on the bow to be at least nine inches in length, and those on the sails not less than two feet and a half, the letter “S’ to be placed on the bow in a line with the number, and on the sails above it a table of rates fixed the fees to be asked of a vessel brought in, with penalties for any departure from these rates. 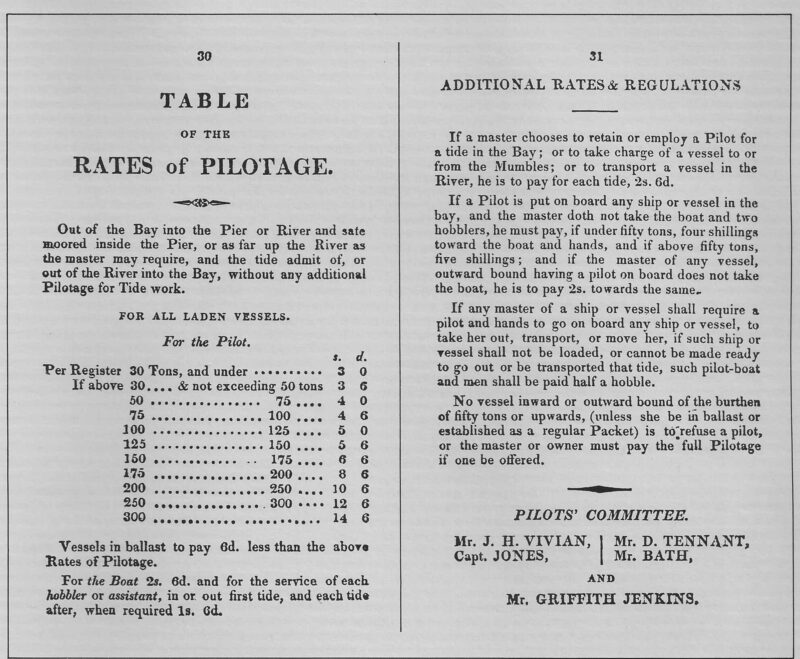 Drunkenness, unskilfulness, negligence, inattention, fraud, evasion, or corrupt practice were to be subject to suspension or dismissal. All working of vessels not in sight was banned between 9am and 6pm on Sundays.

Living is tough, dangerous, and competitive

For the duration of the 19th Century pilots were entirely at their own resources. Their working lives were hard, dangerous and competitive. Once word was about that a large vessel was en route for Swansea (information gleaned from brokers), the pilot would set out to one of three recognised pick up stations, the farthest of which was between Oxwich Point and the Helwick lightship. Competition was so intense, however, that the younger pilots were frequently to be found off Milford (4-5 days sailing) in order to fall in with the ship – a source of much complaint the older pilots, who were left with the smaller charges picked up locally. In order to bring ships safely into harbour the pilots used natural and man-made landmarks such as Mumbles Point, windmills and inns. Pilotage is a year-round occupation requiring men to go to sea in all weathers. 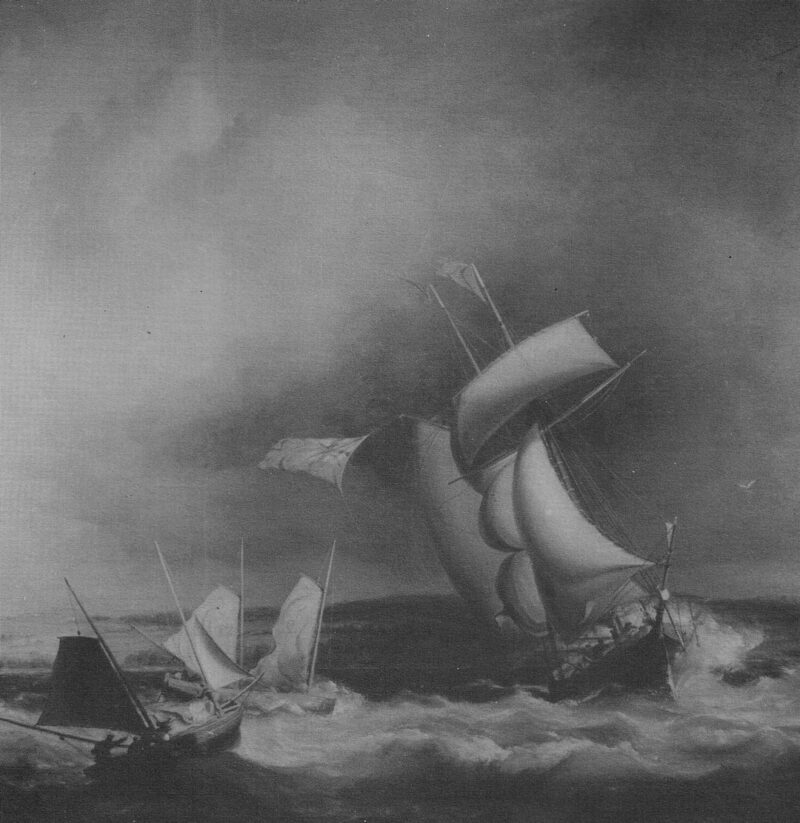 In July 1823, the pilot boat Angally was run down by a vessel making for the harbour about three miles south of Mumbles Head and was totally lost. On this occasion the pilot was fortunate to be picked up as the vessel was sinking and his hobblers later rescued by the vessel’s boat.

January 1880 saw weeks of severe gales which caused the drowning of two seamen in East Dock, the Ethel of Newcastle being taken in tow by 2 tugs, the barque Ashlow parting her moorings, and the Cambrian Princess colliding with the pierhead. At the height of the storms on 21st January, a Swansea licensed pilot, Philip Mitchell and his hobbler were washed off their punt in huge seas while attempting to board the steamer Mascotte. Although the captain of a nearby tugboat (the Gwalia) threw a rope to the men, Mitchell was drowned and his hobbler, a Mr. Burton, died later in hospital. Pilots were also expected to give evidence at enquiries into lost or abandoned vessels; they were often the last people to see departing boats close at hand. 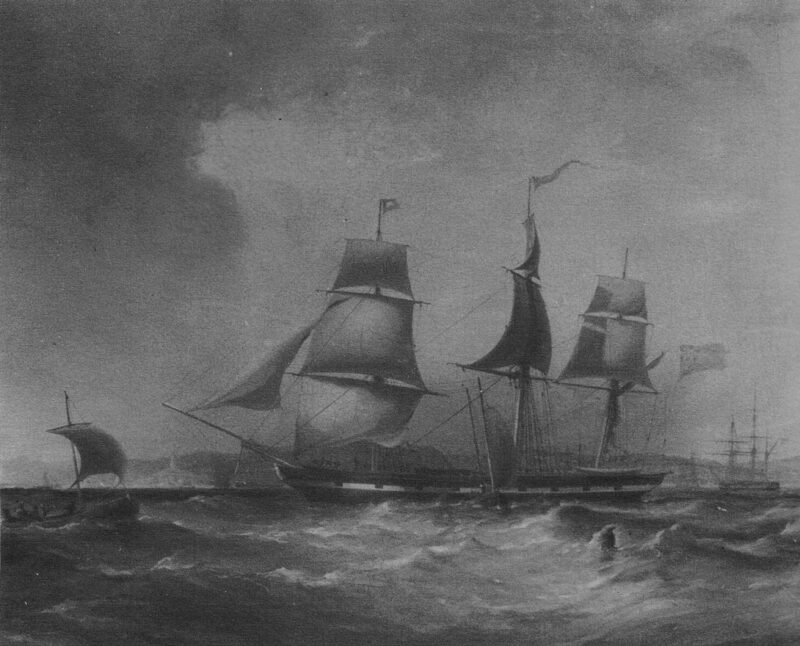 In the days of the pilot cutters the pilot would spend most of his working life eating, sleeping, and searching for vessels on his boat, before making contact with a ship making for his home port. He was a man of considerable courage, who knew every aspect of the Channel, at all times of day or night in all weathers. The Swansea pilot, in addition, had to contend with those from Bristol, Cardiff and other up-channel ports. In the slack hours spent searching for ships between working the sails and sleeping the men would indulge in spinning yarns, or reliving historical events related to seen or unseen landmarks.

The sea pilot was a much-respected figure in 19th Century Swansea. Several pilots were admitted as hereditary Freemen, or Burgesses as they were known locally. For the demanding and dangerous work, remuneration was above average. The Government abstract for the returns relating to pilotage in 1920 showed that 1599 British and 1575 foreign vessels were registered into and out of Swansea, and that the 23 pilots net earnings was £991.8s.8d each for that year.

The boats they relied on

The early open topped 19th Century vessels were about 23 feet long, very basic and provided no cover to the pilot and his hobblers. From about 1850 onwards, the craft were fully decked, weighed between 20 and 30 tons, with a length of about 50 feet, a beam of 13 feet and a draft of 8 to 10 feet. 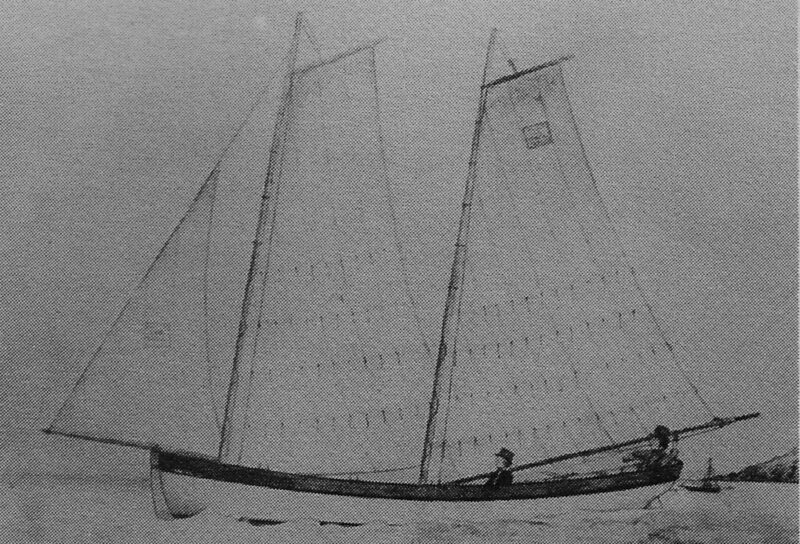 By the 1850’s the vessels were models of compactness, generally with two cabins which housed all the domestic comforts. One cabin housed the kitchen, the other the sitting and sleeping areas, with berths for three or more stacked in recesses. The pattern continued until the introduction of the Beaufort. 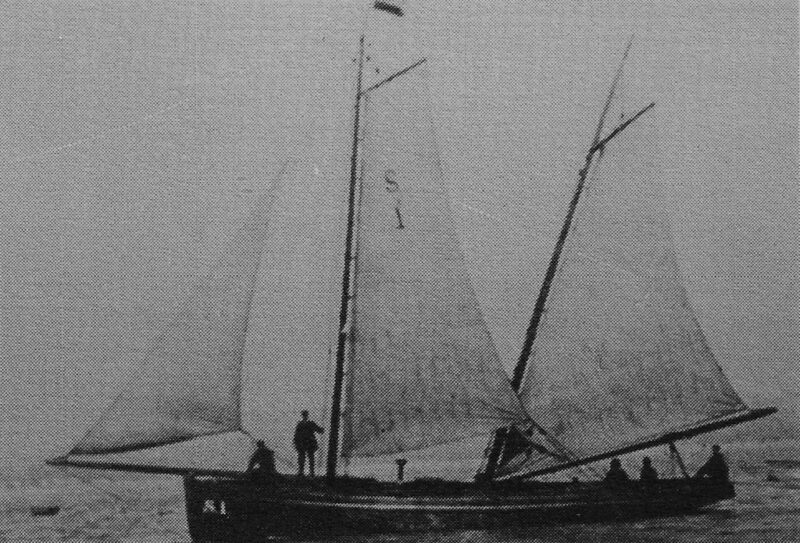 Under the Swansea Harbour Act of 1896, the Harbour Trustees were given permission to purchase or hire vessels for pilotage or towage, and within 2 years the old pilot boats were largely superseded by the steam cutter Beaufort, built by Seath & Co. In Glasgow, which had the distinction of being the first steam cutter to be built in the world for the purpose of laying alongside vessels at sea to embark and disembark pilots direct. Beaufort was 90 feet long, some three times the size of her sailing predecessors. By 1904 only two sailing cutters were listed alongside Beaufort, Grenfell and Benson, and the names Ace and Rosser still showed in the list of licensed pilots. As late as 1913 arguments were still being exchanged on the respective merits of sail or steam as the best means of propulsion for pilot cutters. 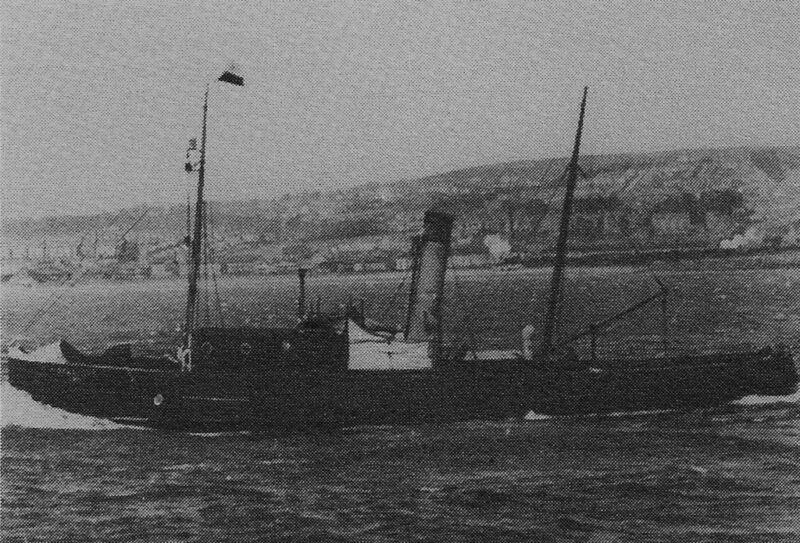 In 1924 Beaufort was relieved by Roger Beck, a slightly larger vessel which served in the dual capacity of pilot cutter and naval examination vessel during World War II, concerned with the salvage of a considerable number of vessels suffering from enemy action. After 35 years service Roger Beck was replaced by Seamark, built at Appledore, with a service speed of 12 knots raised by 2 x 480 bhp Lister Blackstone Diesel Engines. 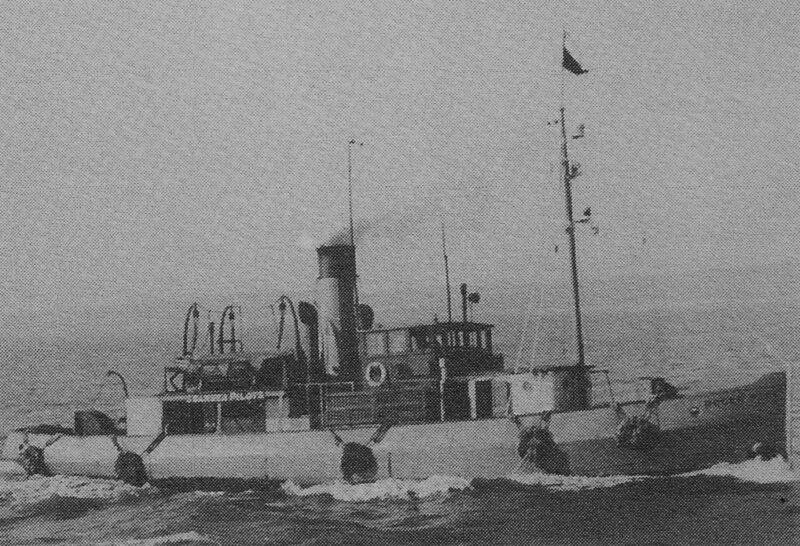