Take a stroll around Swansea Marina. It’s so pleasantly peaceful these days that it’s hard to imagine the noisy drum of industry, as ships discharged their ballast or loaded their cargoes, and the steam-powered machines that opened lock gates and sluices did the heavy lifting. 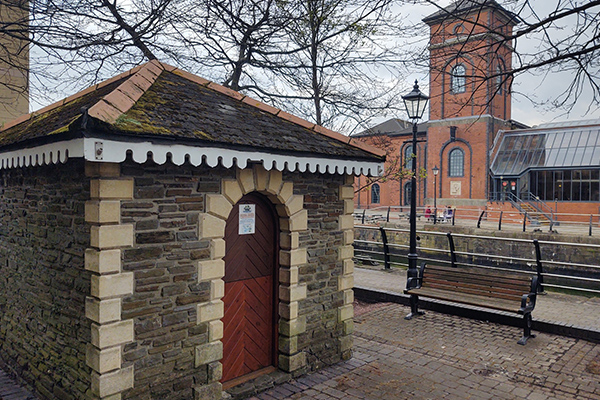 But take a closer look at Pumphouse Quay and its surrounds and you will find some useful clues. Why the quay’s name itself is insightful, it is named after the hydraulic pumphouse, whose tower has dominated the south dock basins since the beginning of the 20th century.

We reveal the history behind the building to help you see this little corner of our city in a different light.

Machinery to run a dock basin

By the opening of the South Dock in 1859, a sum of £15,984 had been spent on hydraulic machinery. The backwater supply of the dock basin was pumped form the lockage waste by a 24hp Easton and Amos steam engine capable of discharging, with a lift if 5 feet, 720,000 gallons of water per hour. 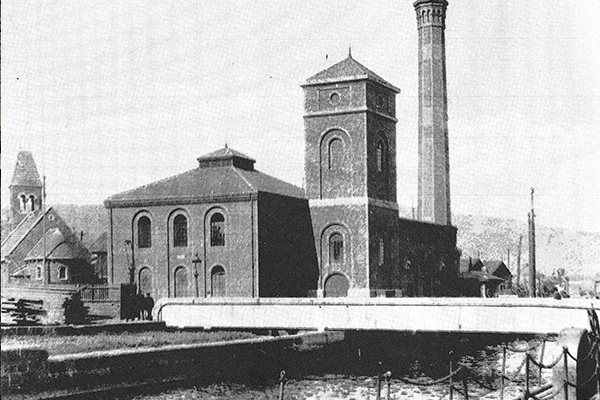 James Abernethy, the designer of South Dock, consulted Sir William Armstrong, the noted hydraulics expert, who recommended that the different machines employed for opening the gates, bridges and sluices, the capstans for hauling vessels in and out of dock, the discharging of ballast, the loading of coals, and the shipment and discharging of general cargoes, should be worked upon his hydraulic system, with accumulators equivalent to an effective pressure of 750 lbs per square inch. To this effect, three high-pressure, direct-acting steam engines were employed, of 80hp, 30hp, and 12hp respectively. Additional power was provided by two separate 8hp hydraulic engines on each side of the lock. These were housed in small Hydraulic Engine Houses, one of which has been rebuilt and is featured in Abernethy Square. Apart from these, all machinery at this time was placed below ground level and covered by cast iron plates.

In the 20 years which followed the opening of South Dock no fewer than five Harbour Acts were initiated to improve and expand the installations by developing a new west pier, a new dock entrance, an extension of the Half Tide Basin and a new system of harbour railways. By 1882 the dock could accept vessels carrying up to 6,000 tons.

To cope with the new swing bridge and the new lock gates (eventually fitted into the new outer barrel in 1912), an enhanced hydraulic system was developed, based on the Hydraulic Pumphouse and its tower, opened in 1901. The system was centred on the giant vertical balancing ram and accumulator in the tower, with back up engines fitted into the first floor. These engines forced water into that part of the hydraulic ram called the Accumulator, in the middle of which was an iron ram, which operated as a piston. The ram was fitted near the top of the Accumulator with a watertight packing ring, with immense metal weights above the ram itself, to increase the force with which the ram bore on the column of water below. From the bottom of the Accumulator, several miles of pipes were laid to the lock gates, the capstans, sluices and coal hoists. Parts of the system could be shut down, which had the effect of increasing the force which could be applied at any point. 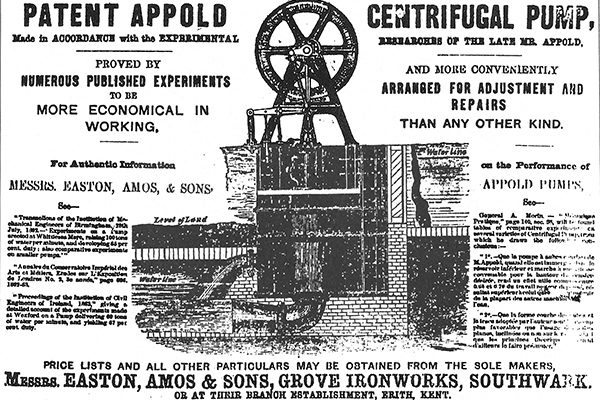 The two giants at the core of the system were Fire and Water, these are celebrated on the small memorial plaque at the base of the Tower. Above this is a larger carved plaque, in Portland Stone, which portrays an Easton and Amos Steam engine, of the type initially installed in the late 1850’s to pump water from the locking system. This would have been operated along with an Appold centrifugal pump and an impellor.

The freestanding wall to the east of the Pumphouse incorporates another carved Portland Stone plaque which shows a steam engine of the type then in use in Britain for raising power – Alban’s Monumental Steam Engine of 1839. The main cylinder in the centre oscillated round a shaft and worked directly onto the crankshaft of the flywheel. At the top of the installation is the centrifugal governor, an ingenious invention which automatically controlled the speed at which the engine ran. 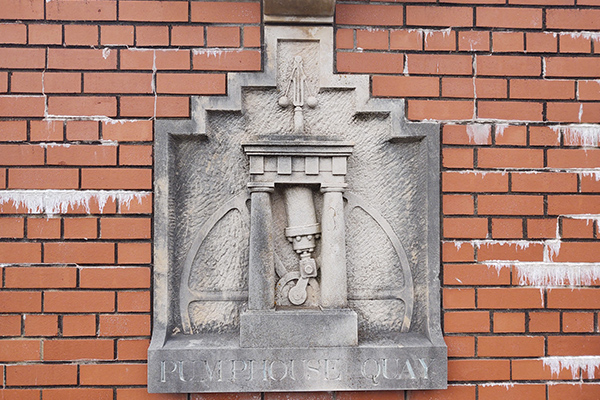