Get active with Sport and Health
Find an activity
Home Events His Dark Materials: World Building in Wales

Free to enter
The Glynn Vivian Art Gallery in Swansea is delighted to present, in partnership with Bad Wolf, a look behind-the-scenes of BBC and HBO’s multi-award-winning His Dark Materials. Based on Philip Pullman’s award-winning trilogy of novels, the series concludes with the third and final season later this year.

For the first time in this major exhibition, visitors will be able to see costumes, concept art, Visual Effects footage, props and more from across all three seasons.

The trilogy follows Lyra Belacqua (Dafne Keen), an orphan who lives in a parallel universe in which human souls live outside the body in the form of animals called dæmons. We first meet Lyra as a baby, left under the care of the scholars at Jordan College by her supposed uncle, Lord Asriel (James McAvoy). The trilogy follows her extraordinary journey through the many Worlds of His Dark Materials, pursued by the religious authority, the Magisterium. Aiding her on her journey is Will Parry (Amir Wilson), and her own dæmon, Pan (voiced by Kit Connor). The cast also features Ruth Wilson as the formidable Mrs Coulter, Lin-Manuel Miranda as aeronaut Lee Scoresby, and Simone Kirby as scientist Mary Malone.
The majority of the series was filmed at Wolf Studios Wales in Cardiff.

The exhibition will fill the gallery’s beautiful Atrium and Room 8 and 9 on the first floor. In the Atrium space visitors can see key props such as the alethiometer, the subtle knife, and the amber spyglass, as well as larger set pieces such as the Cittàgazze angels, Magisterium banners, and Lord Asriel’s projector. In Rooms 8 and 9, there will be the opportunity to see intricate costumes from characters across all three seasons, as well as concept boards, illustrations, videos and Visual Effects sequences showing the full spectrum of creativity involved in bringing the stories to life. This exhibition will not only celebrate Philip Pullman’s brilliant trilogy and Bad Wolf’s fantastic television adaptation, but also the importance of artistry and creativity in all its forms that contribute to bringing a TV series to life. 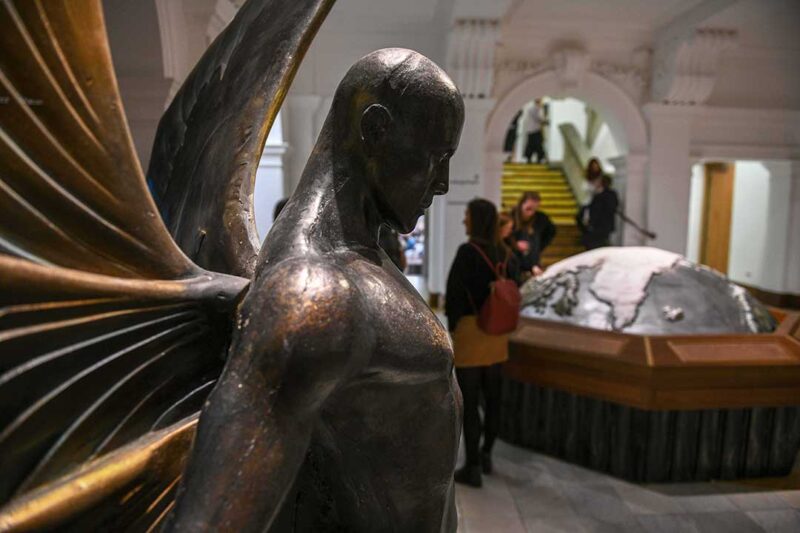 Date
02 Dec 2022 - 23 Apr 2023
Venue
Glynn Vivian Art Gallery
We use cookies on our website to give you the most relevant experience by remembering your preferences and repeat visits. By clicking “Accept All”, you consent to the use of ALL the cookies. However, you may visit "Cookie Settings" to provide a controlled consent.
Cookie SettingsAccept All
Manage consent