People have been living on Gower for a quite a long time – at least 33,000 years at the last count. Over the millennia, the Peninsula’s former inhabitants have left plenty of reminders of their presence. You’ll encounter dozens of scheduled ancient monuments dotted around Gower’s hills, commons and coastline. Sometimes they’re hidden right beneath your feet, in subterranean spaces like Paviland Cave and Tooth Cave, shadowy portals into the lives of our distant ancestors. You can’t miss Gower’s mighty monuments and standing stones that add a layer of otherworldly mystery to the Peninsula’s already legendary landscapes.

On Gower it’s easy to leave the 21st century behind. Simply take a few steps off the beaten path and you’ll find yourself in another world seemingly untouched by recent history. Time travel has never been so easy. 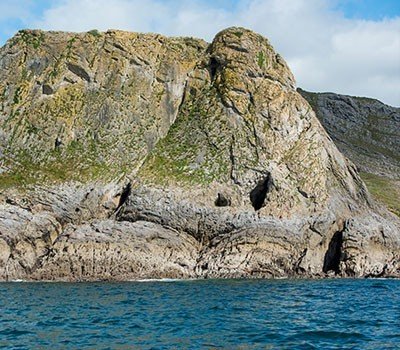 Travel even further back in time; follow our earliest ancestors underground. Gower has a fascinating cave system, which protects some ancient secrets. The narrow, seemingly endless Tooth Cave goes on and on for almost a mile, making it the longest cave on Gower. An excavation in 1962 uncovered the remains of human habitation. These Bronze Age cave dwellers left behind tools, pottery, animal bones and other ancient artefacts.  The site of the cave can be visited, but entry to the cave itself is limited for safety reasons. Paviland Cave is Gower’s hidden superstar. It’s been on the map for quite a while – 33,000 years to be exact. This archaeological A-lister, one of Europe’s earliest known burial sites, is the final resting place of the famous ‘Red Lady’ (actually, the ochre-tinted Palaeolithic-era skeleton found here in 1823 was male, but the name stuck). It’s easy to understand why the cave lay undisturbed for aeons – its tricky location makes visiting a hazardous process.

Let’s get one thing clear: as far as we know, no giants have ever actually been buried here. But this place, also known as Parc le Breos, still has some pretty big stories to tell. A series of excavations at this long-chambered cairn dating back to the early Neolithic period have uncovered the remains of more than 40 people. Tests have revealed that bones found in the chambers were significantly older than those found in the passageway, indicating that the tomb was in continuous use for centuries. Nearby Cat Hole Cave is one for prehistoric art enthusiasts. A cave painting of a reindeer found in Cat Hole Cave in 2010 is the oldest piece of rock art in Britain (and quite possibly in all of north-western Europe). An unknown artist scratched the picture into the rocky wall more than 14,000 years ago, when the cave was used as a transit camp by Ice Age hunters. The cave is easy to reach on foot, which makes it all the more amazing that the painting lay undiscovered for such a long time.  (Access is limited to the mouth of the cave to protect the cave painting). 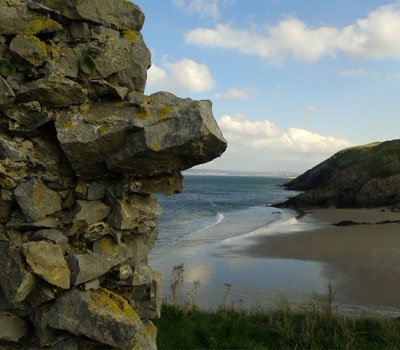 Here’s proof that nothing stays the same. Time and tide wait for no man, especially so in the case of Stone or Iron Age settlers at Burry Holms on the northern end of Rhossili Bay. In those far-off times it would have been an inland hill – an ideal secure settlement spot for our ancient ancestors. Nowadays it’s a tidal island. Stone Age spear heads have been found here, alongside the remains of an Iron Age fort and medieval monastic ruins. 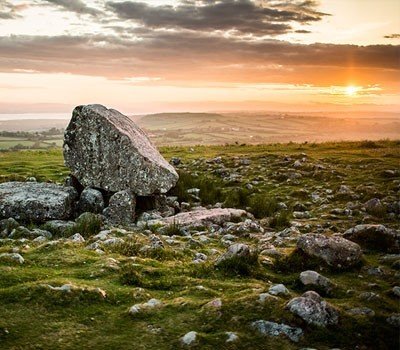 Big is beautiful for Arthur’s Stone. The 25-ton capstone that crowns this Neolithic tomb is a real rock star (though Arthurian connections – like those throughout Britain – are suitably vague). You have to admire the architectural ingenuity that must have been required to work with such massive materials in an age of crude stone tools. The hard work was worth it. Arthur’s Stone is still at the top of the pile when it comes to ancient monuments. Its eye-catching setting on elevated Cefn Bryn common with far-reaching views surely helps too. 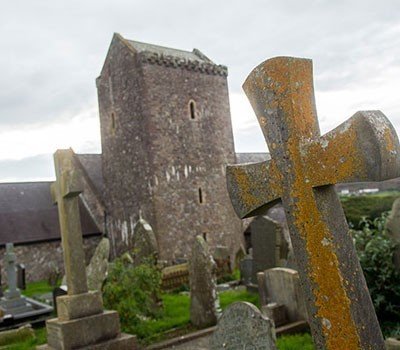 Though they never gained as much of a foothold here as in other parts of the UK, the warlike Vikings still left their mark on the peninsula. In 986AD a raiding party destroyed St Cenydd’s Priory in Llangennith, while some Viking-influenced place names suggest there may even have been a Norse colony here. The invaders’ fingerprints are all over one of Gower’s most iconic sites. Spectacular, serpentine Worm’s Head takes its name from the Viking word for ‘dragon’. 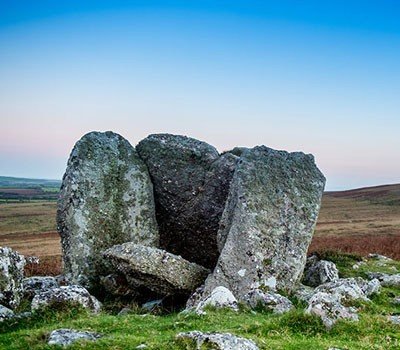 Mysterious menhirs (or standing stones) are dotted about Gower, maintaining their lonely watch over the peninsula since the Bronze Age. We know they were put here by our ancient ancestors, but that’s about as far as it goes when it comes to these enigmatic monuments. Some say they denote sacred sites, others that they were used as navigational waypoints, while those of a mystical bent believe they mark powerful ley lines. Who knows, maybe Bronze Age folk simply liked looking at them?