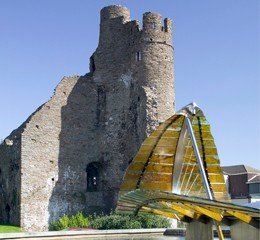 Though now dwarfed by the modern city centre buildings surrounding it, ruined Swansea Castle was once a mighty fortress of huge strategic importance. Since the 13th century, it has survived sieges, rebellions and even the Blitz. Ghost hunters reckon the castle is haunted by a mysterious woman in blue. The spectre is said to wander the castle grounds, abruptly vanishing when approached. While many claim to have spotted her, no one knows who she was or why her spirit now resides here. 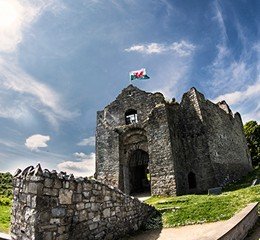 This medieval fortress has looked out over Swansea Bay since the 12th century and has had a colourful career as a residence of the Lords of Gower, a fortress and a prison! King Edward I visited on his tour of Wales in 1284 following his defeat of Llywellyn ‘ein Llyw olaf’ (our last Leader). 14th century graffiti art can be seen in the chapel, this and a fine example of a tracery window can be viewed by crossing a state-of-the-art glass bridge across the missing first floor of the castle. The ancient keep also has its own ghost – the White lady. 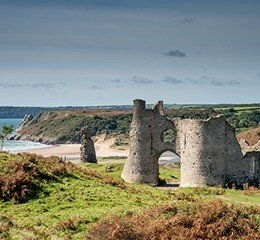 Pennard Castle’s formidable fortifications date it back to the troubled times of the 12th century and its exposed position above Three Cliffs Bay have eroded it into the romantic ruin of today. But local legend tells a different story; Pennard’s lord refused to allow the Gower fairy folk to dance at his wedding, so they conjured up a terrible sandstorm that reduced the fortress to rubble. Pennard’s atmospheric ruins are also believed to be home to a Gwrach-y-rhibyn, the Welsh equivalent of Ireland’s shrieking banshee. 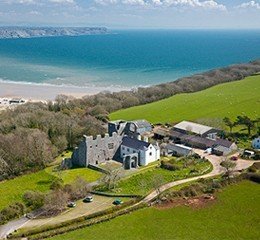 On a hilltop overlooking Oxwich Bay, the Castle has watched over Oxwich village since Tudor times. More of a fortified stately home, this magnificent mansion was built to impress by the influential Mansel family on the site of an earlier fortification. It’s said that the castle gate was the scene of a mortal battle between two of Gower’s leading families – the Mansels and the Herberts – where one of the ladies of the household Anne Mansel was killed by a misfired stone. 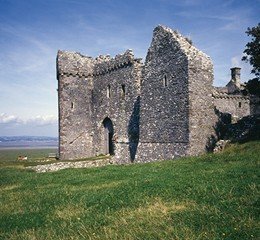 Another fortified manor house, majestically perched on a hilltop overlooking the Burry Estuary. Most of the remaining building was built in the 14th century. The castle has passed through the hands of some of Gower’s power broking medieval and Tudor families; initially the de la Bere family, the Herberts and also the Mansels – one of the great Tudor families – Sir Rice Mansel attaining an influential position at the court of Henry VIII. Weobley Castle is situated in the farmyard of a working Gower farm, whose specialty is saltmarsh lamb! 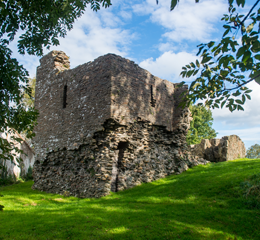 Only the tower remains of this 12th century castle, but its location at the mouth of the estuary of the River Loughor, has been valued for its stragetic importance since the 2nd century. The Romans established the fort of Leucarum on this site to protect the road into Gower. The fort gave way to earthwork fortifications and finally the 13th century tower seen today.