Enjoy our Outdoor Attractions this Summer!
Find out more
Home Blog Looking back at Adelina Patti

Looking back at Adelina Patti

Did you know the Patti Pavilion was originally a winter garden at Craig y Nos Castle in the Swansea Valley?

It was gifted to Swansea upon the death of Adelina Patti, who loved the area and made the castle her home.

The family moved to the US in 1846 when Adelina was three.

She spent 63 years enthralling the music world, giving her first public performance at the tender age of 8 and her last at the ripe old age of 71!

At the height of her career she was able to command more than $5,000 a performance as well as a percentage of the takings.

Her first marriage to the Marquis de Caux (17 years her senior) took place on 29th July 1868. He suffered lung problems and although she cared for him during his illness, they grew apart and Patti found comfort in the arms of her colleague Ernest Nicolini.

Rumours of the affair ruined Adelina’s reputation and social life, but had little affect on her career, and box office sales, if anything, soared! She was finally granted a divorce in 1885. In the meantime, Patti had purchased Craig y Nos in 1878. She paid £3,500 for the initial building and 17 acres, but bought another £10,000’s worth of surrounding land soon after. She married Nicolini in Ystradgynlais on 10th June 1886. However he suffered from liver and kidney problems, and Adelina was by his side when he died in Pau, France on 18th January 1898.

By the November of the same year, Adelina announced that she was to marry the Swedish Baron Rolf Cederström. The wedding took place at St. Michael’s Roman Catholic Church, Brecon in January 1899 Adelina was 56, the Baron 28! Following the Wedding, several changes occurred in both Adelina’s private and public life. She limited her performances and the infamous parties at os ceased. The Baron reduced the number of staff at Craig y Nos and alienated many of her closest friends.

Adelina made her final will in 1917, leaving almost everything to her husband – including Craig y Nos. She had heart problems and died on 27th September 1919. She is buried at the Pére Lachaise Cemetery in Paris.

Craig y Nos was Adelina’s haven and she spent a great deal of money on home improvements. She added servants wings and a clock tower, stocked the river with fish and installed an electric light plant in the grounds – rumour has it that Craig y Nos was the first private residence in the UK to be powered by electricity.

She built up a rapport with her Welsh neighbours, was extremely generous to the people in the surrounding area and was fondly referred to as ‘Lady of the Castle’, “Lady Bountiful’ or ‘Queen of Hearts’. She played a number of charity concerts in Swansea and Brecon and her fondness of the area was reciprocated in 1886, when thousands of locals decorated their villages to celebrate her marriage to Nicolini. 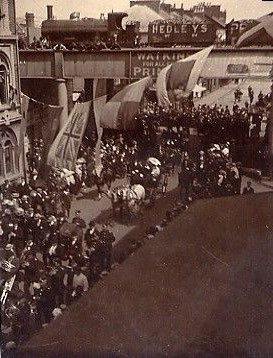 In 1891, the magnificent Patti Theatre was officially opened at Craig y Nos. Adelina also opened the Severn Tunnel in 1887 which enabled the direct London – Neath train to operate. In May 1897 she was made an Honorary Burgess of Brecon and given the freedom of the borough. A ward in Swansea Hospital was named after her, and in July of the same year she took part in the opening of the city’s Grand Theatre.

In the pre-war years, Craig y Nos was her anchor — she spent at least six months of the year in her ‘castle’. On 20th June 1912 she was also awarded the freedom of the city of Swansea and became the only woman in the UK to be honoured by two boroughs.

Following Adelina’s death, in 1920 Craig y Nos was put up for sale. The Winter Garden had been promised to Swansea, thus it was dismantled and removed to the city, where it remains as The Patti Pavilion. It was officially opened following resurrection in Victoria Park on 5th June 1920-having cost an estimated £4,000 to transfer.

The Welsh National Memorial Association purchased Craig y Nos and the surrounding 48 acres for £19,000 in 1921, establishing a tuberculosis sanatorium. In the 1950’s it became a geriatric hospital and remained so until 1986. The grounds are now open to the public as a Country Park, run by the Brecon Beacons National Park Authority. These days the castle is privately owned and can be hired for a variety of functions and weddings.

Listen to Adelina Patti on Spotify (recorded in 1905)