The Three Nights’ Blitz:
evidence you can see today

Even after 80 years, if you look closely enough you can still see signs of the devastating impact the Luftwaffe’s bombs made on Swansea during World War Two and the Three Nights Blitz.

At about 7.30pm on Wednesday 19 February 1941 a German plane flew over Swansea, the pulse of its engine making it recognisable to ARP (Air Raid Precautions) warden, Laurie Latchford.

During the three nights that followed, wave upon wave of Luftwaffe dropped their bombs upon the town below. In his wartime diary, Laurie Latchford describes the green flash of and curtains of white light of the incendiaries.

The Luftwaffe bombers dropped canisters, each containing 36 bombs, which a clockwork mechanism opened as it approached ground level, allowing the cluster of incendiary bombs to spread over a concentrated area, ensuring maximum damage.

Such was the intensity of German bombing raids during the Three Nights’ Blitz, Latchford titles his diary entry for Friday 21 February 1941 ‘The Drowning Wave’. He describes waves of enemy aircraft dropping parachute flares, followed by incendiary bombs and then high explosives. “The noise of gunfire, bursting bombs, and aeroplanes was worse than I had experienced before.”

“Over all Swansea were houses and shops broken open and torn by high explosives, or burnt to rubble-filled cellars, some from last night’s raid; the fresh wounds showed stark, without the thin covering of snow.”

Three days bombardment left its mark on Swansea, reducing to rubble much of the old town centre. Latchford describes the market, which was once glass-covered with high brick walls, as a mass of twisted girders.

We can see the extent of the destruction in the lack of older buildings in today’s city centre. Once familiar landmarks like the Ben Evans store or the Wesley Chapel have gone, reduced to rubble during the blitz.

Walking today though Oxford Street, Whitewalls, Portland Street, The Kingsway and Union Street, we see mainly modern buildings, built quickly in the late 1940s and early 1950s to get the town back on its knees, working again.

However, some buildings avoided total destruction, and almost wear their bomb-damaged scars with pride. You just need to know where to look…

At Castle Street’s ground level, looking closely at the masonry between the glass frontages to the shops and cafes of Castle Buildings, you will notice distinct differences in colour and texture of the stonework, often separated by what appears to be large cracks. The inner masonry is the original pre-war structure. The outer section, with squared-off corners, is a concrete mix added to repair the damage caused by the bombs dropped during the Three Nights’ Blitz.

Can you imagine the strength of the bomb blast to blow large chunks of masonry from the corners of the building and set it ablaze?

Attached to a wall, between two shops, in College Street you will find an unassuming plaque dedicated to the ‘Glory of God’, a solemn reminder that on that spot stood Wesley Chapel, destroyed by enemy action.

Nowadays, we are more likely to pass through Orchard Street in a car or on a bus than on foot. However, take a short stroll along the pavement adjacent to the former police station (now home to UWTSD Students’ Union among others) and glimpses of the Three Nights’ Blitz impact will be your reward. Shrapnel craters pockmark the bright red bricks of the fine-looking building. 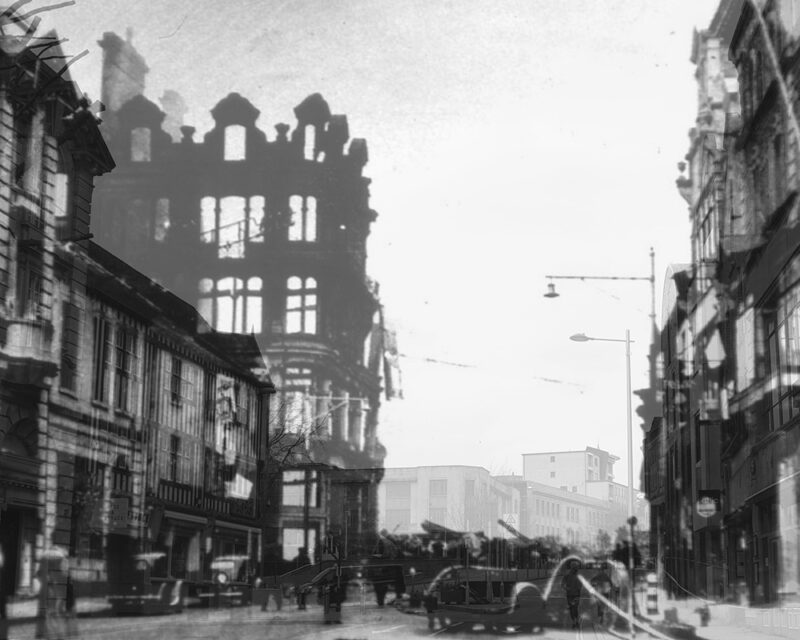 The site of Castle Square has been the setting for a number of significant events in Swansea’s history. In 1941, it was the home of the Ben Evans department store. However, unlike nearby Castle Buildings the popular store did not survive the Three Nights’ Blitz.

The Three Nights Blitz in numbers

You can order books on the Three Nights Blitz online or by phone for pick up at your local library using the new click and collect service from Swansea Libraries.

West Glamorgan Archives Service have published a number of online resources about the Three Nights Blitz and its impact on Swansea and its people.