Music legend Pete Ham’s daughter says she feels closer to her Dad whenever she’s in Swansea. 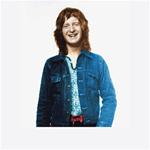 Petera Ham, who lives in Glasgow, is visiting Swansea at the end of April for celebrations marking her father’s life.

Pete Ham, founder of 1970s rock group Badfinger, is best-known for helping write ‘Without You’ – a song that became a worldwide phenomenon for Harry Nilsson in 1972 and has since been covered by Mariah Carey.

A blue plaque is being unveiled in Pete’s honour on Saturday April 27. The plaque will be located on Ivey Place close to Swansea railway station because that’s where Pete’s first band, The Iveys, originally practiced.

Among the other hits Pete wrote for Badfinger were ‘No Matter What’, ‘Day After Day’ and ‘Blodwyn’.

Petera said: “I’m so proud that my Dad’s home city is honouring him with a blue plaque. He was Welsh through and through and always let people know it. Blodwyn was one of my Gran’s favourite songs and is now one of mine too.

“I love being in Swansea and hearing the Welsh voices – I can feel my Dad around me when I’m in the place he called home. Although I was born after he died, I learned a lot about him from my Mum and many of his friends. He was a gentle soul who never really chased the fame – he only cared about his music, friends and family.”

Cllr Nick Bradley, Swansea Council’s Cabinet Member for Regeneration, said: “The blue plaque scheme will recognise people who’ve made significant contributions to puttingSwansea on the map over the centuries, whether it be through music, science, art or other fields.

“Pete’s blue plaque is the first of several to be unveiled in Swansea this year. We’ve achieved great things as a city and this scheme is all about celebrating the individuals who’ve been pivotal to our success.”

The blue plaque unveiling will be followed by a tribute concert for Pete Ham at the Grand Theatre.  Badfinger’s Bob Jackson, members of the Storys, Mal Pope and two of The Iveys’ original members, Ron Griffiths and David Jenkins, will be among the line-up.

Tickets for the concert are available from the Grand Theatre.